IF YOUR JOURNAL IS LESS THAN 6 MONTHS OLD OR DOES NOT HAVE A REASONABLE POSTING HISTORY, YOUR REQUEST TO JOIN WILL BE DENIED.

NOTE: This community is currently under full moderation status. If you wish to join and have a friends only journal, please contact the moderators/maintainers before you attempt to join the community. No one with a journal less than 6 months old or without reasonable posting history will be accepted. This community functions primarily in English. If your journal is not in English, please e-mail the mods (in English) to be considered for admission. This is particularly true if your journal is in a non-Roman alphabet (Cyrillic, Kanji, Arabic, etc.).


CONTACT US: Send e-mails to the following address. READ THE REST OF THE INFO PAGE AT THE *VERY* LEAST BEFORE YOU APPLY FOR MEMBERSHIP. IF I COULD MOVE THE "JOIN THIS COMMUNITY" BUTTON TO THE BOTTOM OF THE PAGE, I WOULD. (Ferret is hopeful that the meds will help the twitch.) Feel free to comment on which part of it you like best, and why.

nonfluffypagans@gmail.com -- ALL OF THE MODS GET THIS EMAIL.


Meet the staff here at The Monkey House. We have

moon_ferret who is married to

simianlovedoc. Those two, along with

mycorethoughts came up with this idea lo those many years ago.

mzwyndi wandered in and got stealth modded. Then there's

smarriveurr who made the mistake of writing poetry for us. Last but not least,

the_ellcrys was hanging around the bar one night (note from

the_ellcrys, this is code for "we were getting drunk and chatting in gmail together") and I suddenly thought it was a good idea to mod her, too. We base our modding on very serious criteria. *nods sagely* 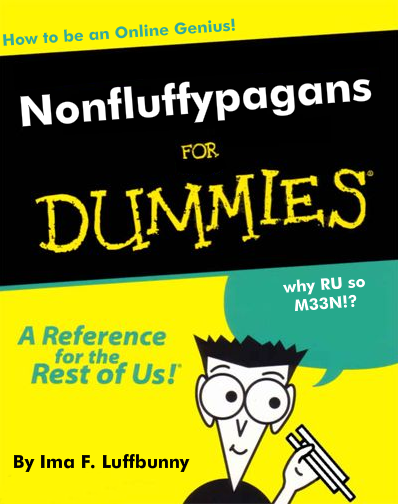 We are not a snark community. We started as one, and grew out of it. There are a couple good ones out there that are always looking for good snarks.

Please check the memories for mod posts and information. You must be a member to comment. Having the community friended is not the same thing. WHEN YOU JOIN NFP, WE ASK THAT YOU LURK FOR A WHILE. THIS IS WHY NO ONE HAS POSTING ACCESS WHEN THEY ARE APPROVED. THIS WILL NOT CHANGE ANY TIME SOON.


Apparently some things need to be said right off the bat. No spell requests. No prayer requests. No requests for medical/homeopathic/any of that crap advice. Please read TEH MEEN MOD POST. No one here claims to be nice. And we won't make them. If you have a bitch, take it elsewhere. Temple of the Cat? Dot_Pagan_Snark? We have been both places. We lived. We have also been ripped apart in personal journals. We all cried ourselves to sleep. Or not.

And I am now convinced that Teh Dramaz never end. What fun would it be without it?

We, the NonFluffyPagans, as a group unified in the spirit of refusing to engage in arguing with those who will not listen to fact, hereby declare:

Any one who claims to speak to the Divine, and can offer no more than " 'cause my spirit guide told me so" will be thwacked. Hard. This means you.

Anyone espousing the virtues of authors like $ilver Rabidwolf, Edain McCoy, and DJ Conway, among others can expect to encounter great, heaping amounts of disagreement and uproarious laughter. Ditto with anyone making statements about how horrible the Burning Times were. The first one to post "Never again the Burning Times" will be used as an example to the others. Facts, people. Plain and simple. Ditto for anyone whining about witches being hanged (or worse yet, BURNED) at Salem. Those who insist on such fluffy attitudes and beliefs will be corrected.

Anyone who raves on endlessly about Middle Earth, Elven language, or who makes any attempt to add a LOTR veneer (or any other pop culture nonsense) to Wicca or any other traditional path will be immediately and summarily ignored. Continued attempts will result in posts being pulled.

Just because *you* may happen to believe in the Three-fold stipulation on magical practice, it does not mean that everyone else is held to it. Although most of us have a sense of "what goes around, comes around---eventually," the fact of the matter is that Three-fold is NOT a universal "Law-that-Must-Be-Obeyed."

Eclectic Craft practices are accepted and encouraged. What is NOT accepted is drawing from so many different belief systems that the resultant practice is without merit (i.e, is contradictory, hodge-podge with absolutely no forethought to whether it even makes sense, etc.) and is insulting to those who DO follow specific paths.

Discussion and debate are encouraged. Temper tantrums and inane prattling are NOT. Belief systems and opinions are welcome. Fiction is not.* Be prepared to back up claims. Be prepared for people not to agree with you. Doesn't mean that they are wrong, mean, out to get you, attacking you or that it is time to take your trad and go home. Stick around and reply. Rabid debates have always ended in learning and growing. Research, learn, grow, as someone else says all the time. How can you do that without talking to others who think differently than you?

Posts from other communities are fuel for the fire. If someone says something incredibly hideous on another board, tell us about it in your own words (there...there, does that give everyone the warm fuzzy feeling they were missing?). That is what happens when you post idiocy on the net. Anyone and everyone can look at it and use it.

The mods on this list are a varied group. We have a FamTrad Eclectic, a Celtic Reconstructionist, a Marcionite who also happens to be a Celt, two initiated British Traditional Wiccans (one of whom has returned to Christianity) and gods only know what

the_ellcrys are. All we know is he wandered in one day and got modded. It happens. We have researched both our trads and others. Sometimes out of necessity, sometimes just for fun. We are willing to make statements we can back up factually, and MORE than willing to say when we don't know. We hope that others can do the same.

Please do not post spam, quizzes, or other material for the purpose of flaming or annoying community members. Also please do not post with comments screened or disabled. Those who do will be removed. And maybe even ban hammered. Depends on who gets to them first.

Please put introductory and/or long, rambling posts behind an LJ cut. And, if you feel the need to quote from a newspaper article or other copyrighted work, please just include a snippet along with a link to the rest. That's not because we mods are teh meen (well, we are; see above), but because we could run afoul of various international copyright laws by allowing it. Don't get us sued. We don't like that.

*Fiction: False lineage (particularly those constructed to gain trust from others), false backgrounds and personal "histories," and works of fiction that are not clearly marked as such and are not intended to promote discussion and an exchange of ideas (such as a parable). Creative Pagan story-writing should be directed to

A sense of humor is critical to belong to this group.

We reserve the right to modify or add to these existing forum rules as needed.

Don't be fooled by imitators! Not everything that says "nonfluffy" is nonfluffy. We invite you to view the other communities in the NFP family: